A retreat centre near Glastonbury offering quality facilities for courses, workshops and seminars.
Getting Here

For your journey to the centre we encourage you, if you can, to minimise CO2 emissions, either by sharing your car or by coming on public transport. However you manage it, have a good journey and we look forward to welcoming you.

From London Paddington take Plymouth/Taunton/Paignton/Penzance line trains to Castle Cary station which is 20 minutes from EarthSpirit. From there you can

Alternatively, you can take the train from London Waterloo to Yeovil Junction (or Castle Cary). Then bus 68 (Mondays to Saturdays only) to Yeovil Station and bus 77 to Compton Dundon or book a taxi.

From Street or Glastonbury: 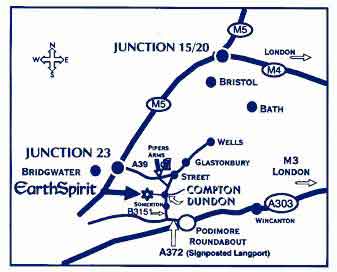 From London take the M3 for c 39 miles to the A303 . Fork left and follow the A303 for c 77 miles. (Be prepared for possible traffic slow down at Amesbury 2 miles before Stonehenge (c 49 miles before EarthSpirit). Drive past Wincanton to the large Podimore roundabout, turning on to the A372 signposted Langport. Turn second right onto the B3151 signposted to Glastonbury, Somerton, Street , and Kingsdon . Follow this road passed Somerton and Littleton hamlet. 500 yards after Littleton, just before Dundon Hill , take the turning left signposted Dundon called Peak Lane. Follow this lane for nearly one mile until you see a house on the left with a rusty , faded once black iron railing in front. Immediately after this house turn left on a small lane signed to EarthSpirit. Turn left just before thatched farmhouse into concrete yard and park. Large, tiled, converted barn is the home of EarthSpirit. 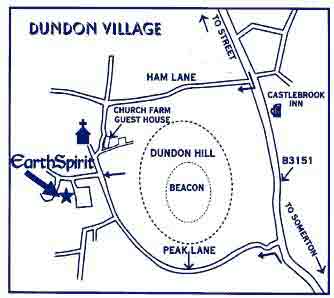 From M5 take Junction 23 signposted Glastonbury. Follow signs to Glastonbury (A39) through the village of Ashcott, until the Pipers Arms pub on right. Turn onto the road on the right just before the Pipers Arms signposted to Berhill, in the direction of Somerton. Follow this all the way to crossroads. At intersection turn right on B3151 towards Somerton. In Compton Dundon turn right onto Ham Lane, signed to school and church. Follow this lane for nearly one mile, bear left round bend, up hill, past right turn to church and left hand turn to the school. Take next right turn into small lane, immediately after red brick bungalow and before black iron railings. Turn left just before thatched farmhouse into concrete yard and park. Large tiled, converted barn is the home of EarthSpirit.

Link to map of the area: multimap

1) Cycling is possible. We are 13 miles from Castle Cary station, 5m from
the bus stop in Glastonbury and 3m from the bus stop in the town called Street.
2) Alternatively use the CycleStreets.net route finder to create a route from
wherever you are.
3) We have a cycle rack for storage + showers.

Bristol airport is approximatively 1 hour from EarthSpirit by taxi. There are national and international flights. See the bus section (above) to take the bus to the town called Street.

Calculating your Carbon emission:
If you are interested in finding out how much CO2 you are generating by driving, flying or taking public transport to the centre you can do so by going to the appropriate tab on this link: www.carbonfootprint.com/calculator.aspx

Offsetting your Carbon emission:
If you would like to offset your emissions check out this link: www.carbonneutral.com/
and f you are coming by plane, we hope you consider making your flight carbon neutral and maybe help plant some trees. www.woodlandtrust.org.uk/support-us/give/personal-carbon/

Car sharing
Please consider car pooling with other participants. If you are a group leader, you can set up a social media group to encourage your participants to do car sharing or refer them to existing car share websites like https://liftshare.com/uk ;  www.blablacar.co.uk